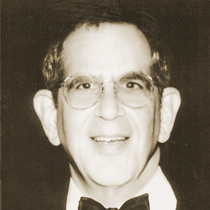 Lifestyles magazine’s readers voted Rabbi Daniel Syme one of the 18 North American Jews “who will be most influential in shaping the future of the Jewish community in the 90’s and into the 21st Century.

This compliment comes highly merited. The new spiritual leader of Temple Beth El carries with him an impressive resume to his position. But more importantly, he draws on his life’s experiences to bring compassion, caring and determination to the Temple that accomplishments alone can not convey.

Syme spent 23 years with the Union of American Hebrew Congregations, most recently as the senior vice-president. He oversaw all of the UAHC’s programs, including his special interests of outreach, education, television and film production, and the task force on youth suicide prevention.

After graduating from the University of Michigan with Phi Beta Kappa honors in 1967, Syme was preparing to continue his education and accept a fellowship in psychology. However, at age 21, a near fatal bout of cancer changed his life forever. Prior to surgery, he asked his father, Rabbi Robert Syme of Temple Israel, to get him an application to the Hebrew Union College. He said that if he recovered he was going to devote his life to God.

That vow held true, and five years later Syme was ordained from the Hebrew Union College, Cincinnati campus in 1972. While at HUC, he won the Farband Hebrew prize, the Sulzberger Award in Homiletics and the Lazarus Prize for academic excellence. He also earned a doctorate in education from Columbia University Teachers College, and taught at the New York campus of the Hebrew Union College-Jewish Institute of Religion.

His intense drive led to numerous accomplishments as both an author and executive producer. He is a published author or co-author of 26 books, on topics such as Jewish parenting, youth suicide prevention, Christian-Jewish Relations, Jewish social action, ritual, theology and Jewish education.

His books include: Finding God; The Jewish Home—A Guide To Jewish Living; Why I Am A Reform Jew; What Happens After I Die; Drugs, Sex and Integrity; and The Jewish Wedding Book. Syme has been also been the executive producer for seven UAHC television programs, including “A Conversation with Meantime Begin,” “To See the World Through Jewish Eyes,” “A Conversation with Yitzhak Navon” and “Choosing Judaism”.

Syme has also been very active in national and international organizations, serving as vice president of the American Zionist Youth Movement, director at large of the Board of the Jewish National Fund of America, a board member of the Untied Israel Appeal, and as vice president of the American Zionist Movement. He was one of the first chairmen of the Coalition for the Advancement of Jewish Education, has served on the International board of the Memorial Foundation for Jewish Culture, the Executive Boards of the National Religious Education Association and the National Council for Jewish Education, and as co-chairman of the Coalition for Jewish Unity.

Temple Beth El’s motto is “Come Home to Beth El”. A native of the Detroit Area, Rabbi Syme feels that he has truly come home.

Rabbi Daniel B. Syme
FRIDAY APRIL 8, 2016
Clergy Panel, Acceptance and Hope: Perspectives on Suicide from Faith Traditions – How can faith help us through times of loss and pain when someone dies of suicide? Is suicide a sin? How can people of faith help those affected by suicide, and reach out to people who may be at risk? Clergy from three great monotheistic traditions—Jewish, Christian, and Islamic—address the theme "Acceptance and Hope: Perspectives on Suicide from the Faith Traditions," with time for questions and interfaith discussion.
View Schedule