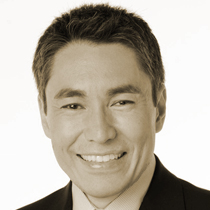 Dr. Frank McGeorge can be seen on Local 4 News at 5 p.m., 6 p.m. and 11 p.m. with Good Health reports. In addition to helping metro Detroiters with health concerns as a doctor on television, Dr. McGeorge is helping save lives every day in the emergency room at Henry Ford Hospital.

Dr. McGeorge began his medical career in Chicago at Northwestern University where he graduated with Alpha Omega Alpha honors in 1990. He trained in emergency medicine at Henry Ford Hospital in Detroit where, he said, “It really was like the show ‘ER.’ Every day was a crazy drama by itself.”

After residency he completed a research fellowship, focusing in the areas of critical care and resuscitation. Since then he has been busy as a practicing emergency physician with an active role in the community.

He is a past President of the Michigan chapter of the American College of Emergency Physicians, a Board of Directors Member of the Red Cross as well as a former member of the Board of directors for HAVEN, Oakland County’s domestic violence advocacy organization. Dr. McGeorge is also on the editorial board and a reviewer for a number of medical publications.

Before joining Local 4, he was, for years, a frequent expert contributor to local and national news organizations on medical topics. He has received numerous national and local awards for his teaching skills in the science and practice of medicine and formerly directed an Emergency Medicine Residency program.

Why would a busy doctor add the role of health reporter to his activities?
“I’ve always loved the education part of medicine, whether it’s training residents or teaching patients,” he said. “It’s really awesome now to be able to reach so many people at once with health information.”

McGeorge called being a doctor “the best job in the world, saving lives and stamping out disease, I wouldn’t trade it for anything.” Frank is also the proud father of two children, Becky and Connor.

One thing most people don’t know about Frank, he is an avid fisherman.